Chinese Bitcoin mining firms BIT Mining and Fenghua International are relocating to the U.S. and Kazakhstan.
The Bitcoin network hashrate has significantly dropped as miners go offline following the ban.
While the short-term effects are negative, the network is witnessing decentralization of the mining industry.

Publicly-listed Bitcoin mining firm BIT Mining is one of many operations moving overseas due to the ban imposed by the Chinese government.

Another Chinese province pulls the plug on Bitcoin

The mining industry is finally moving out of China.

NASDAQ listed firm BIT Mining shipped its first batch of 320 machines to a new facility in Kazakhstan, with an additional 2600 machines expected before the start of July.

Along with moving operations to Kazakhstan, BIT Mining has also invested in new mining facilities in Texas, which the company claims will mostly run on clean and low-carbon energy.

Additionally, a Chinese logistics firm in Guangzhou confirmed it is airlifting 6,600lbs of mining machines to Maryland, USA, for another crypto mining firm Fenghua International.

On Jun. 18, Sichuan, located in the south-west of China, was the latest province to call on miners to stop operating. The shutdown of mining facilities came after the Chinese government in May vowed to curb the mining business in the country citing environmental concerns.

What Does This Mean for Bitcoin?

Since Jun. 19, the total Bitcoin network hashrate has fallen an additional 13%, continuing its downward trajectory since May.

The total hash rate of the network has dropped over 35% from its peak of 180 exo hashes per second EH/s.

However, despite a decrease in the hash rate and price of Bitcoin, there are positive indicators also.

The Bitcoin mempool, a waiting room for transactions yet to be processed, has remained stable. As hash rate decreases, fewer transactions can be processed, putting pressure on existing miners. A stable mempool size indicates that the total mining power comfortably supports all transactions. 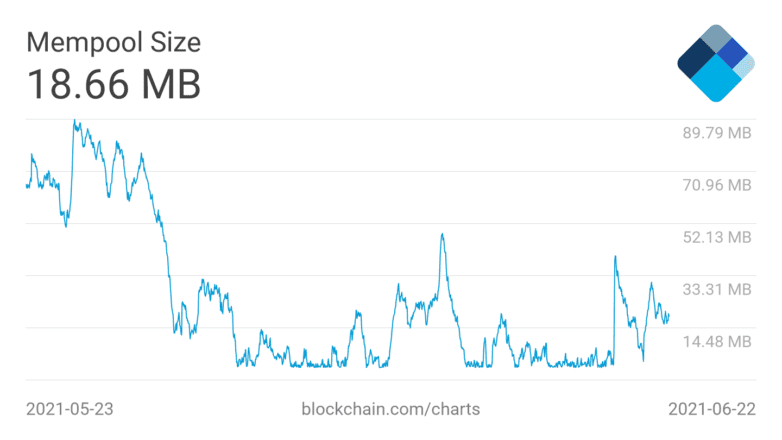 The U.S. as a whole is starting to account for more and more of the total network hash rate. During the recent crackdowns in China, American BTC mining pool Foundry USA was the only Bitcoin mining pool to see an increase in hash rate. It is currently the 6th largest pool on the network, according to BTC.com.

“As miners spread to other locations, they will likely choose places with secure access to cheap energy sources. As a result, hash rate will start recovering, and the network will become even more stable. Additionally, mining will become more decentralized and, likely, more based on clean, renewable energy sources.”

The former Gemini security engineer explained how moving network hash rate to US states such as Texas or Wyoming provides more safety and security than a “centrally controlling” government like China.

The central bank of China called a meeting Monday with the country’s banks to crack down harder on cryptocurrencies, Reuters reported. Central Bank in China Calls for Ban on Crypto…

The head of China’s central bank digital currency (CBDC) research said in a business convention that complete anonymity is impossible. China Firm on “Controllable” Privacy of CBDC  Mu Changchun, the…

China’s Inner Mongolia region will suspend Bitcoin mining before the end of April, according to the government’s new energy saving plan. Inner Mongolia to End Mining China is currently the…